The unique character of the landscape within the Clwydian Range and Dee Valley AONB is distinct, recognisable and with elements that are both natural and human. Landscapes differ because geology, biodiversity, visual appearance, archaeology, history and culture vary from place to place. The interaction between people and their environment makes the AONB a living, working landscape as well as a place of recreation.

The Clwydian Range is an unmistakable chain of summits, clad in purple heather moorland and topped by Britain’s most dramatically situated hillforts. The delightfully varied countryside embraces limestone cliffs and grassland, magical wooded valleys and gentle pastureland. The hills are cut in places by deep valleys carrying the area’s two main rivers: the Alyn and The Wheeler, which often disappear underground into hidden water courses among the limestone.

The area’s breathtaking views take in everything from Snowdonia to Merseyside, reminding us of the unusual perspective of this North Wales frontier – at the heart of rural Wales but with strong links across the nearby border with England. Conversely, this imposing landscape is visible from all directions, inviting discovery and exploration.

The summit of Moel Famau is the highest point in the Clwydian Range at 554 metres, with hills stretching from Prestatyn Hillside in the north to the Nant y Garth pass on the edge of the Dee Valley in the south, and the Vale of Clwyd in the west to the foothills of the Dee Estuary in the east.

Open heather moorland of the high ridge dominates the small, hedged fields and coppice woodland of the lower slopes, and gives way to fertile farmland. Impressive limestone outcrops burst through the surface in a number of places along the eastern side of the range, notably at Prestatyn Hillside, Llanferres and Loggerheads which boast rich grasslands of orchids and other wild flowers that provide a haven for butterflies. Indeed this varied landscape means a rich diversity of wildlife species and habitats.

Our wealth of archaeological and historic remains date from the early prehistoric period to the Second World War, from massive Iron Age hillforts to less conspicuous crop marks and find in the lower areas. Offa’s Dyke National Trail follows almost the entire length of the ridge crest before heading into the Dee Valley.

While many sites are Scheduled Ancient Monuments, protected through Cadw: Welsh Historic Monuments, there are many other historical features such as boundary stones, village wells and milestones that are not protected and therefore much more vulnerable. However they remain important parts of the wider landscape; evidence of past mining and quarrying, settlements and burials, that form a backdrop to our life today.

Our cultural heritage is rich and diverse. Eisteddfodau are held all over the region to celebrate Welsh language, music and poetry, while the area has also traditionally been a popular visitor destination, particularly at the two country parks of Loggerheads and Moel Famau. 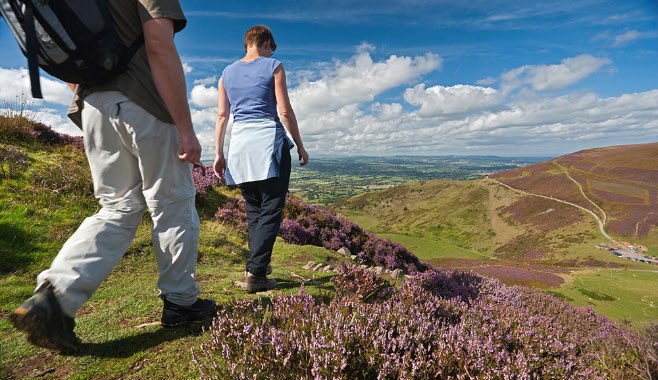